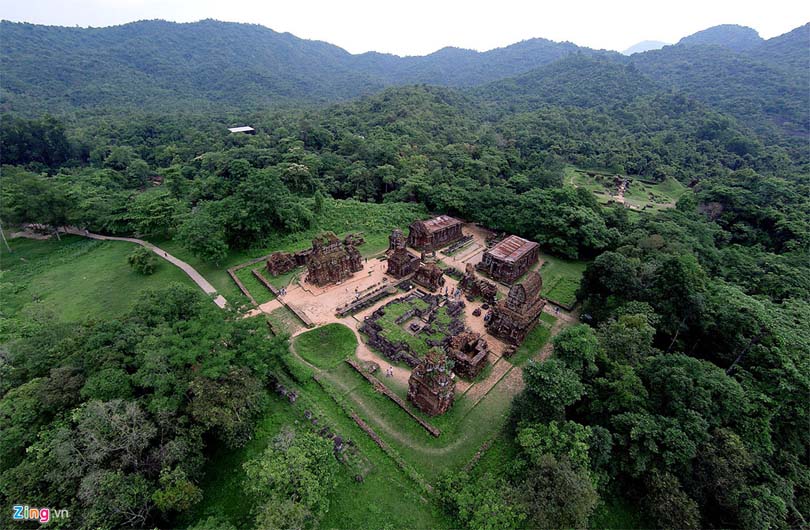 My Son is the former capital of the ancient Cham civilization that ruled Central Vietnam from the second to the thirteenth century. Their religion was primarily derived from Indian Hinduism. My Son is considered to be one of the best-preserved Cham structures in Vietnam. The complex is comprised of seventy Hindu-like towers and temples dating from the second century.

One of the most gorgeous sights that Hoi An has to offer is My Son Sanctuary, Vietnams most noteable site of the ancient Kingdom of Champa. It is located 37 kilometres from Hoi An, roughly a 1 hour drive. Between the 4th and 13th centuries, a culture which owed its religious origins to Indian Hinduism existed on the coast of contemporary Vietnam.

Today, it is still graphically illustrated by the remains of a spectacular sequence of tower-temples. These temples are located on a site that was the spiritual and political capital of the Champa Kingdom for most of its existence. Initially constructed with wood, the structures were fully destroyed by fire in the 6th century. They were then restored in the 7th century by Sambhuvarman, who rebuilt the temples with locally made bricks. Up until 13th century, more than 70 similar temples had been constructed, establishing My Son as a sanctuary of Hinduism within the Champa Kingdom.

To begin your My Son Sanctuary tour, you will be picked up from your hotel by one of our drivers – we will then begin the scenic route to My Son. Positioned within the heart of a breathtaking valley, you will be able to gaze upon the monumental mountains that surround it. Once you have arrived at our destination, you will be given the opportunity to explore the fascinating ruins, learn about the different structures and what historic role they played. Furthermore, you will to also be able learn why it is considered one of the most significant Hindu complexes in South East Asia. After experiencing the My Son Sanctuary and stopping for any priceless photos you would like to capture or you will be driven back to your hotel to end a truly captivating experience.

One thought on “My Son Holy Land Half Day Tour”