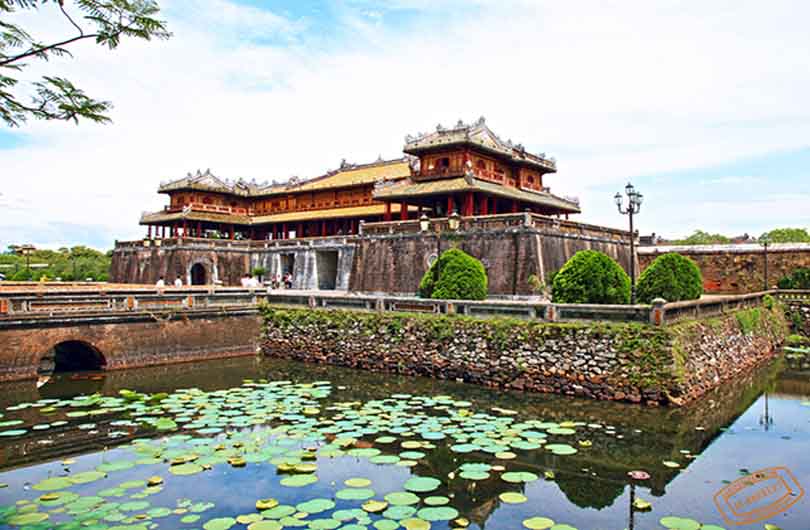 Nestled against the banks of the Perfume River, Hue has an interesting story to tell. Wander the emperor’s tombs, see the fighting arena between elephants and tigers and reminisce to days gone by as traditional Vietnamese music is played as you cruise down the Perfume River.

At 08:00 am pick up at your hotel. Take a short drive to visit Thanh Toan Bridge (Tile-roofed bridge)- an arched wooden bridge, a rare and the most aesthetically valuable bridge among those of Vietnam.

Then, drive into a lush valley of the river where seven tombs were built for seven Nguyen emperors. Each is an expression of the unique personality of the man whose remains it holds and each is comprised of three elements: a temple dedicated to the worship of the deceased emperor and his queen, a stone stele that records the biographical and historical high points of his life, and the royal tomb itself. We will visit two of the tombs of emperors Minh Mang and Khai Dinh before driving outside of town for a lunch of classic Hue cuisine at a restaurant in a beautiful garden setting. Lunch in the local restaurant.

In the afternoon, return to the center of Hué city. The massive Citadel is the most well known and iconic site in Hué. Begun in 1805 by Emperor Gia Long, it is actually a sprawling complex comprised of the Imperial City, several museums, lakes, and lovely gardens, all laid out in a series of concentric circles. Visit also the Forbidden Purple City, originally built in the early 1800s for the personal use of the emperor and staffed by eunuchs who posed no threat to the royal concubines. Nearly destroyed in the Tet offensive, the ruins today house the Royal library and the grounds flourish with mimosa plants and vegetable gardens.

The tour continues with a trip on the Perfume river to visit the towering Thien Mu pagoda, one of the most famous Vietnamese landmarks. Differing legends explain how the pagoda came to be – one tells of an old woman who instructed Lord Hoang Nguyen in 1601 to walk contemplatively along the river with a lit incense stick and to build a city at the spot where the incense stopped burning.

One thought on “Hue Sightseeing with River Cruise”