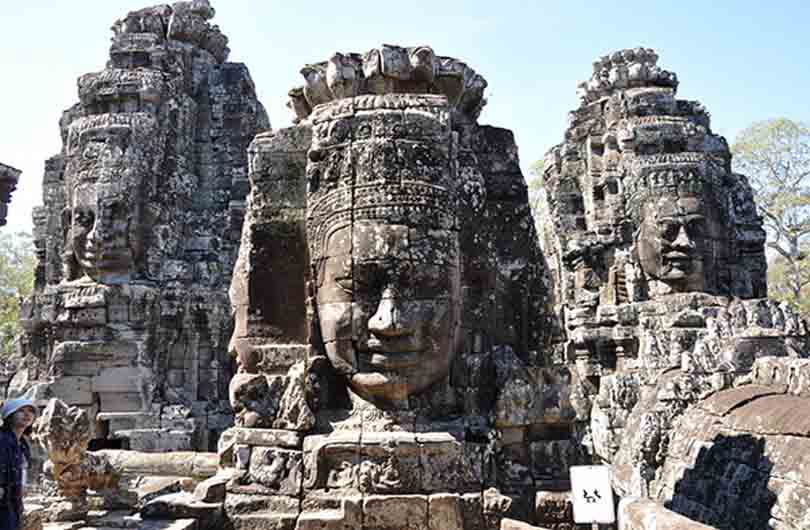 From the wonders of Angkor to charming Hanoi, take a journey filled with culture, history and breath-taking landscapes. Get a glimpse into Cambodia’s past in Phnom Penh then venture through captivating Angkorian temples. See heritage sites in Hue and Hoi An and cruise the Mekong Delta and majestic Halong Bay.

Upon arrival to Phnom Penh, our guide and driver will be waiting to provide transport to the hotel for check in.

After a relaxing break, set out to discover the most remarkable sights of Phnom Penh in a cyclo, an original Phnom Penh mode of transportation and a very fun way to explore this lively city. First, head to the Royal Palace. This palace dates back to 1866 and was the last palace built during the French colonial period. The same complex houses the Silver Pagoda, named for the over 5,000 heavy silver tiles that cover its floors. Its original name is Wat Prakeo, meaning Temple of the Emerald Buddha. Here, view a collection of Buddhas in gold, silver, crystal, and bronze.

Continue to the National Museum, which was built in traditional Khmer-style. It houses the world’s foremost collection of ancient Khmer artistic, archaeological, and religious artefacts from the 4th to the 13th centuries. Over 5,000 pieces are on display, constituting the repository of the Kingdom’s cultural wealth. In addition, the roof space is home to a large bat colony!

The sightseeing concludes with a visit to Wat Phnom Temple, the founding place of the city on a small hilltop and a great place to people watch as the locals come to pray for good luck.

After breakfast, transfer to the airport for a flight from Phnom Penh to Siem Reap. On arrival in Siem Reap, meet with the local guide and head to the hotel for check in.

The afternoon starts with a visit to Angkor. First, visit the incredible temple of Angkor Thom. Angkor Thom was the last capital of the Great Khmer Empire under the reign of Jayavarman VII. This city is surrounded by an 8 metre-tall wall, drawing a perfect square around its perimeter. Enter the city through the ancient South Gate, an impressive carved stone gate.

From here, continue to Bayon Temple, in the exact centre of the city. This temple is extremely distinct, with 54 towers, each with four faces representing the 54 provinces of the then Great Khmer Empire. The Terrace of the Elephants and the Terrace of the Leper King are also must-visits as they are both known for their intricate bas-reliefs.

After an incredible first encounter with the historical wonders of Angkor, return to the hotel.

After breakfast, explore the temples of the Small Circuit by ‘remork’ . Start the tour with a visit to Ta Prohm Temple, built in the mid-12th to early 13th centuries. Ta Prohm is unique in that it has been left largely as it was found: overgrown by jungle trees and vines, with many parts of the temple crumbling to the ground. This makes Ta Prohm one of the most picturesque and memorable of the Angkor temples. The visit will also include Banteay Kdei, a Buddhist monastery from the late 12th Century, and Srah Srang, also known as the “pool of ablutions”. Return to the hotel for a relaxing break during the midday heat.

After a rest at the hotel, depart on a very special sightseeing tour of the famous Angkor Wat. Built during the reign of King Suryavarman II in the early 12th century, Angkor Wat is constructed to symbolise Mount Meru, home of the gods. The divine residence of Vishnu, the King himself was to reside here after his death. Inside the temple, the walls are covered with stone carvings and bas-reliefs depicting Hindu mythology and the wars Suryavarman II fought during his reign. Moreover, Angkor Wat is well-known for the more than 2,000 Apsara dancers decorating the temple. Construction is thought to have taken around thirty years of intensive labor to complete.

After touring this incredible temple, return to the hotel.

After breakfast, spend the rest of the morning at leisure until receiving a transfer to the airport for a flight from Siem Reap to Ho Chi Minh City.

Arrive in Ho Chi Minh City and transfer to hotel. The rest of the day is free to spend at leisure.

Depart the hotel for a full-day Ho Chi Minh City tour. Head to Cholon, the Chinatown district, to discover the area’s markets, shops and the Cantonese Thien Hau Pagoda. Visit Vietnam’s first traditional medicine museum, the FITO Museum, with an amazing collection of 3,000 items relevant to the development of traditional Vietnamese medicine. Implements used to prepare indigenous herbs and objects commonly found in traditional pharmacies can be seen in the galleries as well as ancient books and documents on traditional Vietnamese medicine.

Head back to the city centre to visit Ben Thanh Market where an incredible display of fresh produce and various goods are offered.

In the afternoon, visit the War Remnants or History Museum (choose whichever one is preferred) and the former Presidential Palace. A vehicle will be available throughout the day. Stroll to the major sights of colonial Ho Chi Minh City: the Old Saigon Post Office, Dong Khoi Street (formerly Rue Catinat), Continental Hotel, Opera House and City Hall. After a full day of exploring the city, head back to the hotel.

In the morning, leave bustling Ho Chi Minh for a two-hour drive to the delta town of Cai Be.

On arrival board, board the boat for a cruise to Cai Be Floating Market. Traders work the river and some have been living on these waters for generations. Produce at the market are hung on a pole in front of boats to attract customers and make it easier for people to see from afar what is on offer.

After visiting the market continue to a cottage factory where ‘pop-rice’, rice paper and coconut candies are made. Return to the boat for the cruise to Dong Hoa Hiep Island. Along the way, admire the scenery and the daily life of the local villagers. Lunch will be local Mekong-style serving specialties of the area. Following the cruise, drive back to Ho Chi Minh City.

After breakfast, transfer to Tan Son Nhat Airport for the short flight to the central port city of Da Nang. On arrival in Da Nang, transfer to Hoi An, a major Asian trading port in the 17th and 18th centuries whose charming architecture and relaxed lifestyle has changed little over the years. Take a walking tour of the ancient town centre to visit the former merchants’ homes, the 400 year-old Japanese Covered Bridge and the colourful market.

Afterwards, spend the rest of the afternoon at leisure. Relax at the hotel or enjoy the scenic ambience of Hoi An with its abundant flickering lanterns along the riverside boardwalk.

Overnight in Hoi An or Da Nang.

Depart in the morning for Hue, the former imperial capital of Vietnam. Its mesmerising tombs and mausoleums of the last emperors of Vietnam reveal fascinating insights into the lives of the imperial families and their subjects. The ancient citadel reflects the pomp and ceremony of the dynastic rulers as well as the scars of many years of turmoil, both ancient and modern (the Royal Citadel was badly damaged in the latter stages of the war).

En route to Hue, stop at the Cham Museum, which contains the finest collection of Cham sculptures in the world, before climbing over the incredible Hai Van Pass, Vietnam’s most scenic stretch of road. Overlooking the sea, stop to take some photos of the gorgeous views here before dropping down to the wonderfully photogenic fishing village of Lang Co for another short visit.

In Hue, start at the UNESCO-celebrated Imperial Citadel, where the Nguyen Dynasty ruled between 1802 and 1945. From here take a cyclo through dai noi ‘Old City’ to Tinh Tam Lake where the Emperors used to come to relax.

Continue on to Thien Mu Pagoda, overlooking the Perfume River. Constructed in 1601, the temple is comprised of a 21-metre tall tower representing the seven reincarnations of the Buddha. In the grounds of the pagoda is the Austin car used by a famous monk to drive to Saigon in 1963. Protesting the southern regime and with the car in the background, the monk’s self immolation became one of the war’s most infamous images.

Start the day with a visit to the city’s vibrant Dong Ba Market to see its abundance of fresh produce.

Continue the explorations to the former emperor Minh Mang’s tomb located in a tranquil setting of gardens and ponds.

Journey on to Khai Dinh’s Tomb designed in traditional Vietnamese style with a European touch making it unique from the other tombs in Hue.

From here transfer 30-minutes to Hue Airport for the 1-hour flight to Hanoi. On arrival, receive a private transfer to the hotel.

Following breakfast, leave Hanoi for a three and a half-hour drive to Halong Bay including a 20-minute stop on the way. Arrive at the jetty in Halong City around noon and proceed with check-in formalities. After being welcomed on board, a lunch will be served while cruising towards the bay. In the afternoon, enjoy some visits and activities (depending on each boat’s itinerary) or just spend some time relaxing on board. Towards the end of the day the boat sets anchor for the night among the spectacular karst formations of the bay. Dinner is served on board before being lulled to by the gentle swaying of the boat.

Wake up early in the morning to catch an  unforgettable Halong Bay sunrise before enjoying breakfast (brunch on some boats) while the vessel cruises slowly through the magnificent rock formations back towards the port. Disembark and transfer back to Hanoi.

In Hanoi, visit the Old Quarter, also known as the ‘36 streets’. Take a walking tour through charming Hang Be Market and around Hoan Kiem Lake. This bustling area of narrow streets and alleys is home to literally thousands of small businesses and shopkeepers. It’s a great place to explore, with plenty of photo opportunities all around.

Finish the day with a Water Puppet show. This is a uniquely North Vietnamese art form depicting scenes from rural life and episodes of national history.

Depart from the hotel in the morning and head to the Temple of Literature. Established in 1076 as Vietnam’s first university, the temple was established to educate Vietnam’s royalty, mandarins and members of the elite. The university functioned for an incredible 700 years, and its gardens and well-preserved architecture offer a fascinating glimpse into Vietnam’s past.

Next, visit The One Pillar Pagoda, founded by King Ly Thai To in 1049. This structure is one of Vietnam’s most iconic temples. Close by is the mausoleum of the historic father figure of modern Vietnam, Ho Chi Minh, and the former president’s house on stilts where he lived from 1958 to 1969. His former home illustrates the modesty of this Vietnamese revolutionary.  (Viewed from outside; closed Mon and Fri and from Oct-Nov)

If time permits, continue to picturesque West Lake and the sixth century Tran Quoc Buddhist Pagoda. From here, transfer (or stroll along the lakeside) 700 metres to the nearby Taoist temple of Quan Thanh dedicated to Tran Vu, one of the principal deities in Taoism. Enjoy some leisure time for shopping until transferring to Noi Bai Airport for an onward flight.

One thought on “Essential Cambodia and Vietnam”