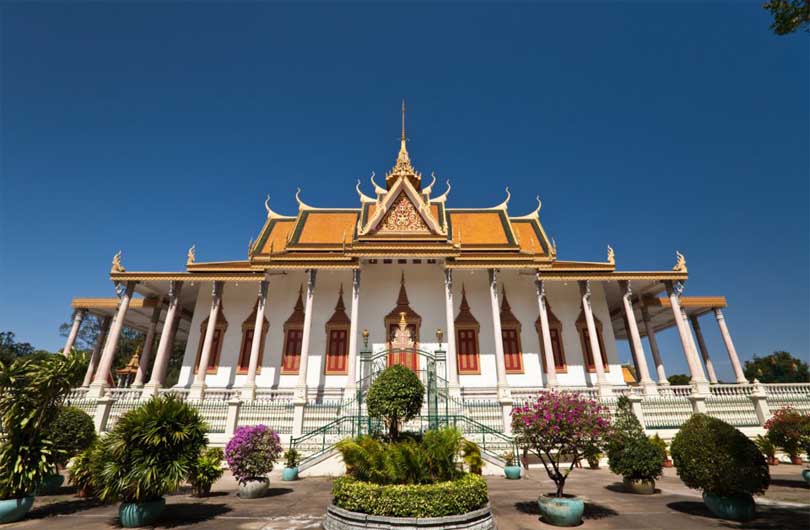 Be immersed in Cambodia’s cultural wonders and see how its past has left an imprint on the present. Explore monuments harking back to the glory days of the royal family and the prosperous Angkor Empire. Meet locals to experience the intangible heritage that lies within in their traditions and religion.

Sitting at the confluence of the Mekong and Tonle Sap Rivers, Phnom Penh was once considered one of the most beautiful cities in the Orient. Despite its recent turbulent history, it still retains much of its former colonial charm with wide tree-lined boulevards and colonial-era buildings.

Upon arrival in Phnom Penh, our driver and local English speaking guide will be waiting to provide transport into the city for the hotel check in.

After settling in, take an afternoon tour through the main sights of the city. Head first to the 19th century Royal Palace, the last palace built during the French colonial period. The palace also houses the Silver Pagoda, named for its 5,000 heavy silver tiles that cover its floors.

Continue next to the Khmer-style National Museum, housing the world’s foremost collection (over 5,000 pieces) of ancient Khmer artistic, archaeological, and religious artifacts from the 4th to the 13th centuries.

In the evening, enjoy a fantastic welcome dinner at Bopha Phnom Penh Titanic, a restaurant serving tasty Khmer (and Western) cuisine on a breezy terrace with sweeping river views. Apsara dancing is performed nightly between 7-9pm.

After dinner, head back to the hotel or head down to the riverfront for the night market.

After breakfast, drive overland to Siem Reap (7 hours): the gateway to the majestic temples of Angkor.

Along the way, stop at Sambor Prei Kuk, one of the most important pre-Angkorian sites in the country. Sambor Prey Kuk was built between the 6th and 7th century and houses over 100 well-preserved temples scattered throughout the forest. Enjoy a beautiful walk through the jungle with breathtaking views; the visit supports a community-based tourism project.

The villages around the temple complex still practice the ancient art of craft making, using materials such as bamboo and rattan. Stop at one village to observe the local production. The community runs the Isanborei Craft Hut next to the temples and sells their products there as part of a community-based tourism project. The local community will also prepare a simple but very tasty lunch near the temples.

Upon arrival to Siem Reap, check in to the hotel with the rest of the day at leisure.

After breakfast at the hotel, spend the morning on a temple tour. Begin with a visit to the ancient city of Angkor Thom, the last capital of the Great Khmer Empire under the reign of Jayavarman VII, known for its 8-meter-high wall drawing a square around the city. Entering through the impressive ancient South Gate, continue to Bayon Temple in the exact center of the city. This 12th century masterpiece is known for its 54 face-carved towers, Terrace of the Elephants, and the Terrace of the Leper King.

Enjoy lunch today at Mahob Restaurant, a culinary hotspot that takes traditional Khmer cuisine to a new level. Using only locally produced ingredients, this beautiful restaurant serves up some of the best local delicacies that Siem Reap has to offer.

Return to Siem Reap for a short break. In the afternoon, embark on an interesting boat trip on Tonlé Sap, Southeast Asia’s largest freshwater lake. Board a local boat and visit Kampong Phluck, a village famous for its homes set on stilts- built to avoid the flood waters of the rainy season (when Tonle Sap swells to four times its size). During the cruise, take note of the passing floating houses and impressive flooded forests, portraying a unique life based on the water.

(Note: Due to low water levels during the dry season, the boat trip is only possible from June to March. However an alternative floating village at Chong Kneas can be arranged instead).

After breakfast, travel to the countryside to see the “gem” of the Angkor area: Banteay Srei. Also known as the “Citadel of the Women,” this remains the best-preserved temple in Cambodia.

On the way back to Siem Reap, stop at the Landmine Museum, which works to promote mine awareness. Mr. Aki Ra, the museum founder, was trained as a child soldier during the Khmer Rouge regime and is working today as a de-miner. In addition to being a museum, it also serves also as a rescue center for a number of landmine amputee children that have been brought off Phnom Penh’s streets or from impoverished rural communities. Transfer back to Siem Reap in the afternoon.

In the late afternoon, depart on a sightseeing tour of the famous Angkor Wat via ‘remork’ (similar to the Thai ‘tuk tuk’). Built in the early 12th century, Angkor Wat was constructed to represent the Hindu/Buddhist home of the gods: Mount Meru. Inside the temple, the walls are covered with stone carvings, bas-reliefs, and more than 2,000 Apsara dancers. Construction of this icon, which is today found on the heart of Cambodia’s flag, is thought to have taken around thirty years to complete.

Enjoy the morning at leisure for some relaxation at the hotel or head out for some shopping in Siem Reap’s interesting markets. Pay a visit to Artisans d’Angkor, an organization established in 1992 to support Cambodian arts and crafts and to help young people find work in their local villages by continuing the practice of traditional arts. Discover how wood and stone carvings, lacquering, gilding, and silk paintings are created.

Transport will later be provided to the airport for the departing flight.

One thought on “Cambodia World Heritage”