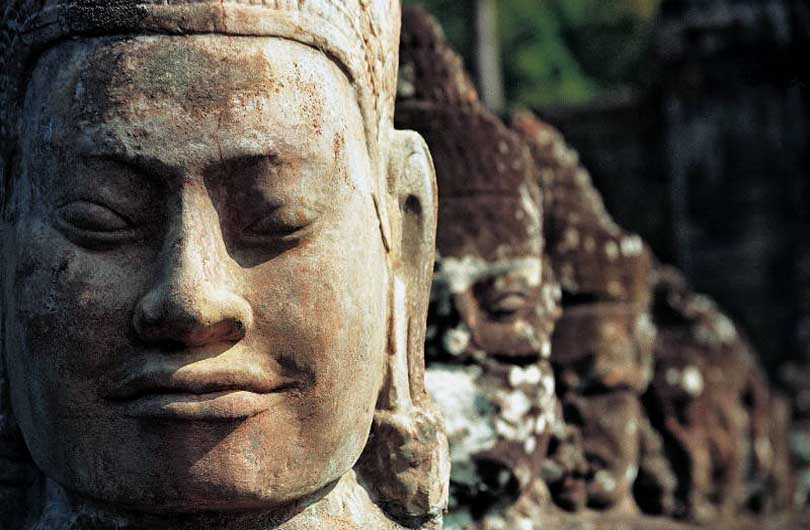 An enchanting land steeped in history, Cambodia beckons the intrepid traveller. Focus on Phnom Penh and Siem Reap to connect the country’s intriguing past with its present charm. See the icon sites and then dig deeper for a better understanding of Khmer culture and traditions.

Despite its recent (turbulent) history, Cambodia’s capital was once considered one of the most beautiful cities in the Orient. Still retaining much of its former colonial charm, Phnom Penh boasts wide, tree-lined boulevards and many colonial-era buildings reflecting its more glorious days.

Upon arrival in Phnom Penh, our driver and local English speaking guide will be waiting to provide transport to the hotel for check in.

Enjoy some free time to relax and freshen up after the flight before enjoying dinner at Malis Restaurant, one the best Khmer fine dining restaurants in the capital.

This morning, gain some insight into Cambodia’s recent dark history on a visit to the Tuol Sleng Genocide Museum. Taken over by the Khmer Rouge, this former high school was converted into a detention and torture center known as ‘S-21’. Equally as harrowing are the Killing Fields of Choeung Ek. Both are grim, but important visits that allow one to dig below the surface and understand present day Cambodia better.

After learning about some of Cambodia’s tragic past, spend some time getting acquainted with modern day Cambodia.
Not far from Stung Meanchey, pay a visit to the humanitarian organization Pour un Sourire d’Enfant (for the smile of a child), providing education and job training to street children who once relied on scavenging the municipal dump. Whilst a visit to the school is not included (to avoid disruption to the learning process) there is time to visit the centre’s shop to buy some souvenirs, followed by lunch at Le Lotus Blanc (the center’s training restaurant).

(Note: Le Lotus Blanc is usually closed during national holidays and for the entire month of April over the Khmer New Year holiday.)

After lunch head back to the hotel and embark on a cyclo tour through the most remarkable sights of Phnom Penh. Begin first with a visit to the Royal Palace, followed by the Silver Pagoda, named for the over 5,000 heavy silver tiles that cover its floors. Its original name is Wat Prakeo, meaning Temple of the Emerald Buddha; the temple is known for its collection of Buddhas in gold, silver, crystal, and bronze.

Continue on to the National Museum, housing the world’s foremost collection (over 5,000 pieces) of ancient Khmer artistic, archaeological, and religious artifacts from the 4th to the 13th centuries. Wrap up the tour with a visit to the hilltop Wat Phnom temple, the founding place of the city.

Back in town, relax with some sunset drinks at the renowned Foreign Correspondents’ Club located on the Riverside. The building is a colonial gem with great views of the confluence of the Upper Mekong, Lower Mekong, Bassac and Tonle Sap rivers.

Begin the morning with a boat trip along Cambodia’s Tonle Sap River. A private, wooden vessel will provide some insight into this lifegiving region of the country; a part of Phnom Penh rarely visited by other travelers.

Travel north along the river, passing many floating villages and fishing stations along the way. Spot pagodas, mosques, and Chinese temples, and pay a visit to some local villages. One of the most intriguing villages belongs to the people of Koh Chen. The so-called ‘Silver Island’, this village specializes in silver and copper smithing.

After lunch (served on board), return to Phnom Penh by boat in the afternoon. Spend the rest of the day browsing through the colourful markets of Phnom Penh. Visit the art-deco Central Market, one of the largest markets in Cambodia, selling clothes, souvenirs, jewellery, and food. Next, visit the Russian Market, the best place in the city for wood and stone carvings, jewellery, clothes and Cambodian silk souvenirs.

After an early breakfast, transport will head overland to Siem Reap (duration 7 hours)- the gateway to the majestic temples of Angkor. A little outside of Phnom Penh, stop in the town of Skuon to see their most famous speciality being sold: deep-fried tarantula! A favourite snack of many Cambodians, many buses and pick-ups stop at the market to buy a bag of the “ch’ngain” (tasty) eight-legged creatures. The spiders are caught in the soft ground of the surrounding countryside and dug out of their burrows. After a short stop continue to Siem Reap.

Upon arrival, check into the hotel. Enjoy a break at the hotel before embarking on the first Angkor discovery tour.

After relaxing at the hotel, head out for a guided tour of the Angkor National Museum. This interactive museum showcases artifacts from the Golden Era of the Khmer Empire by use of multimedia technology.

Head into the actual Angkor complex today with a visit to the Roluos Group. Roluos is the site of an ancient center of Khmer civilization known as Hariharalaya, built by the Angkorian kings in the 8th and 9th century. Roluos consists of three main temples: Bakong, Lolei, and Preah Ko. In addition to the temples, enjoy a trip through the surrounding countryside (paddy fields and sugar palm trees) aboard an ox-cart ride, a fun way to get in touch with rural Cambodia and its friendly people.

The final destination is Roluos Pagoda, where Buddhist monks will perform a private blessing ceremony, wishing health and safe journeys – a memorable experience!

Take a break around midday back at the hotel.

In the afternoon visit the ancient city of Angkor Thom, the last capital of the Great Khmer Empire under the reign of Jayavarman VII. Enter the city through the ancient South Gate before heading onwards to Bayon Temple in the exact center of the city. This 12th century masterpiece is known for its 54 faced-carved towers, Terrace of the Elephants, and Terrace of the Leper King.

Begin the day with a tour of some different Angkor temples, exploring the Small Circuit via local ‘remork’ (similar to the Thai tuk tuk). The most illustrious of these temples is the 12th century Ta Prohm. Ta Prohm is unique in the fact that it has been left largely as it was found: overgrown by jungle trees and vines, with many parts of the temple crumbling to the ground. It is by far one of the most picturesque and memorable of the Angkor temples. The visit will also include Banteay Kdei, a Buddhist monastery from the late 12th Century, and Srah Srang, also known as the “pool of ablutions”.

Return to the hotel for a break during the midday heat.

In the afternoon, set out to visit the legendary Angkor Wat. Built during the reign of King Suryavarman II in the early 12th century, Angkor Wat was constructed following the model of the temple mountain symbolizing Mount Meru, the home of the gods. Inside the temple, the walls are covered with stone carvings, bas-reliefs, and over 2,000 Aspara dancers. Construction of this national icon (found on the Cambodian flag) is thought to have taken around thirty years of intensive labor to complete.

As this is the last evening in Cambodia, a Khmer farewell dinner accompanied by traditional Apsara dance will be an experience to remember.

Enjoy the day at leisure.

Depending on the departing flight time, spend the morning exploring Siem Reap’s colorful markets. Visit Artisans d’Angkor, established to support Cambodian arts and crafts, and to help young people find work in their local villages by continuing the practice of traditional arts. Discover how wood and stone carvings, lacquering, gilding, and silk paintings are created.

Transport will be provided to the airport for the individual onward flight. (Note: based on midday/afternoon departures)

One thought on “Cambodia Discovery Tour”