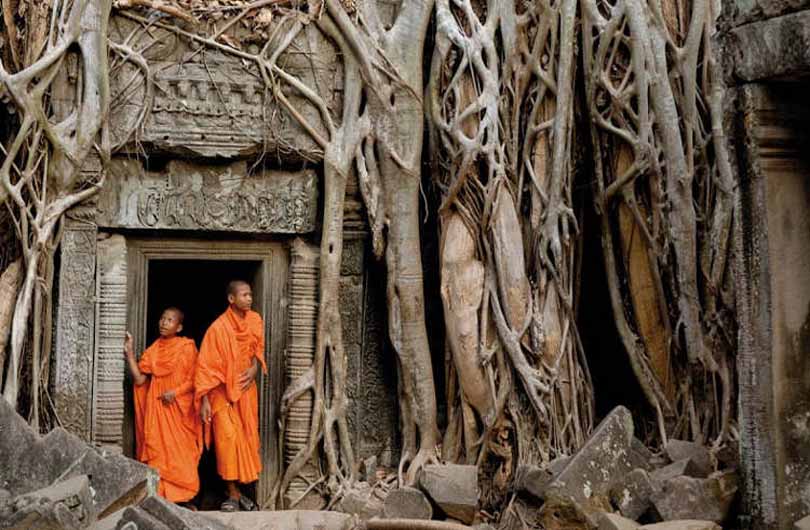 Get in to the great outdoors to discover the real Cambodia. Slow down and soak in the scenery with a bike ride through the Angkor Archaeological complex. Work alongside farmers for a taste of rural Cambodian life. Take a zip line adventure to see Siem Reap from a different perspective.

After arriving in Siem Reap airport and clearing customs, our guide and driver will be waiting to provide transport into the city to the hotel. Enjoy a free evening and prepare for the ensuing day’s adventure!

Begin the Angkor tour with a morning visit to the 12-13th century Ta Prohm temple, a setting of one of the Tomb Raider films. Ta Prohm is unique in the fact that it has been left largely as it was found: overgrown by jungle, trees and vines, with many parts of the temple crumbling to the ground. This makes Ta Prohm one of the most picturesque and memorable of the Angkor temples.

From Ta Prohm, dive back into the jungle and pedal through hidden passages to the ruins Angkor Thom. Enter through the ancient East Gate, boasting (on each side) a row of fifty-four gods and demons hold the sacred Naga snake of Hindu lore.
Exchange jungle paths for proper road as the route turns for Bayon Temple. This 12th century masterpiece is a study in grandeur and is well-known for its fifty-four towers covered in enigmatic faces. The Terrace of the Elephants and the Terrace of the Leper King are also must-visits as they are both known for their intricate bas-reliefs.

The cycle heads southward now, running through Angkor Thom to the famous Angkor Wat. The temple was constructed to represent Mount Meru, the Hindu/Buddhist home of the gods. Inside the temple, the walls are covered with stone carvings and bas-reliefs, as well as over 2,000 Apsara dancers. Construction of this icon, which finds itself on the centre of Cambodia’s flag, was thought to have taken around thirty years to complete.

After breakfast a transfer will be provided to Kompheim Village, the site for the day’s activities. En route, drive through some fantastic countryside illustrated with rice plantations, herds of cows, and buffalo at work… a great photo opportunity!
Upon arrival to the village, meet and spend the afternoon with local families. Activities here vary, depending on what’s needed in the village and the time of year. Throughout the day there will be water, snacks, and fruit available to replenish energy levels; at midday we will eat an authentic Cambodian lunch.

(Note: The day’s activities may include planting rice,harvesting, transplanting or learning how to making thatch roof panels, a tricky task depending on the time of year).

In late afternoon, transfer back to the hotel to freshen up before dinner in town.

Early this morning, set off on bicycles to explore and experience Cambodia’s only zip line canopy tour (inside Angkor Park.) Discover the beauty and excitement of the Flight of the Gibbon as the lines soar above the cherished World Heritage site.
After the zipline adventure and lunch, transfer to the hotel to relax for a bit. Continue in the afternoon with a visit to the market, followed by a tour of Wat Damnak. Home to the Centre of Khmer Studies, Wat Damnak is an independent institution promoting a greater understanding of Khmer culture.

Wrap up the day with a cycle to the alternative to Angkor Wat, called Wat Athvea. Built atop a pre-existing temple in the 12th century, it is believed that this was the training ground for Angkorian workers. Enjoy the serenity of this temple as the sun sets behind the sugar palm trees.

After breakfast, embark on an interesting boat trip on Tonlé Sap to learn about life on the lake.

Tonlé Sap is Southeast Asia’s largest freshwater lake with its size varying greatly depending on the season.

Travel out to Kampong Phluck, a village a bit further away which receives very few tourists. This stilted village is the best place to see the authentic life of the local fisherman and their families who live amongst the flooded mangrove forest. Board a local boat and head out to the lake proper. On the way, there are many houses on stilts and local fishermen plying their trade. Continue further on to explore an impressive flooded forest; keep an eye out for boats bobbing in between the trees!

Return back to Siem Reap by boat and private vehicle for a lunch at Café Indochine.

Transportation will be provided to the airport later this afternoon for the onward flight.

One thought on “Multi Best of Siem Reap Tour”