14 Dishes You Should Not Miss in Saigon

By Detoured Asia 3774 Views One Comments 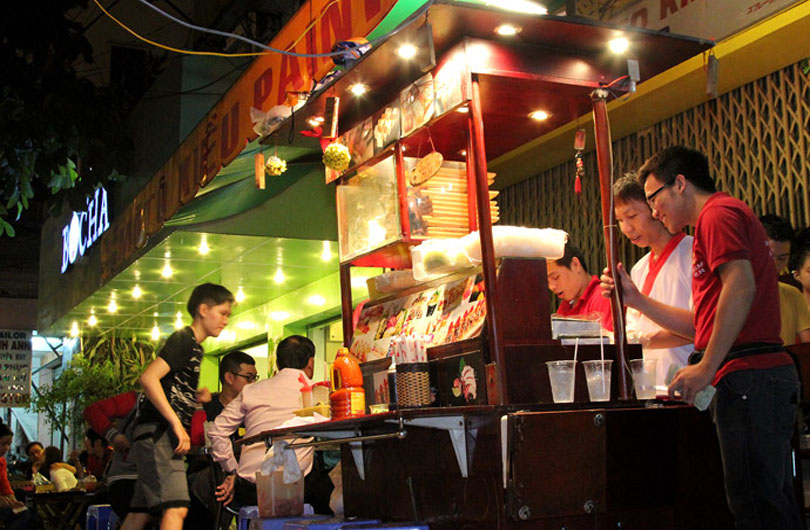 Street food in Saigon (Ho Chi Minh City) is considered the best Vietnam street food. The picture of street food in Saigon permeates every neighborhood, district, and alleyway. Saigon boasts so many street food outlets that the city feels like a giant open-air diner. Every day, tens of thousands of street-side eateries pick up tasty food with cheap price in an informal space – on the sidewalks of the city. Street food is not just wrapped into “food”. In fact, it is about the ambience and atmosphere around. As many people say, if you take street food to your home, would not taste anywhere near as delicious as it tastes on the street. Enjoying street food is definitely one of the best things you should do in Saigon. 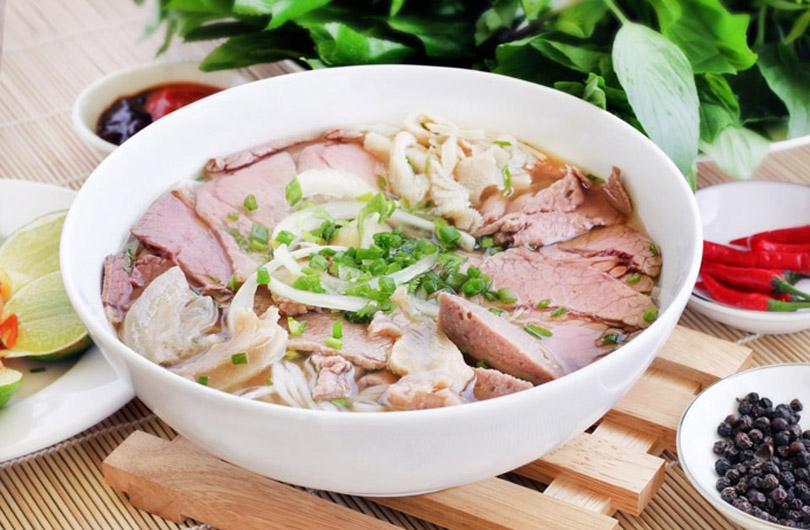 Pho is a traditional dish of Vietnam, and it can also be considered as one of the most typical dishes for Vietnam’s culinary. The main ingredients of the noodle soup are the noodle and broth (or “nuoc leo” – the way to call “broth” in the South) with some slices of meats. People usually opt for beef noodle soup, but there are also chicken noodle soup, pork noodle soup, and shrimp noodle soup for customers to choose. When Pho came into Ho Chi Minh city, it still retains the original flavor but the restaurants will give customers a dish of raw vegetables to serve with the noodle soup, including odor ship, basil, and bean sprouts. Actually, Pho is also one of the best street foods in Saigon tourists should try! 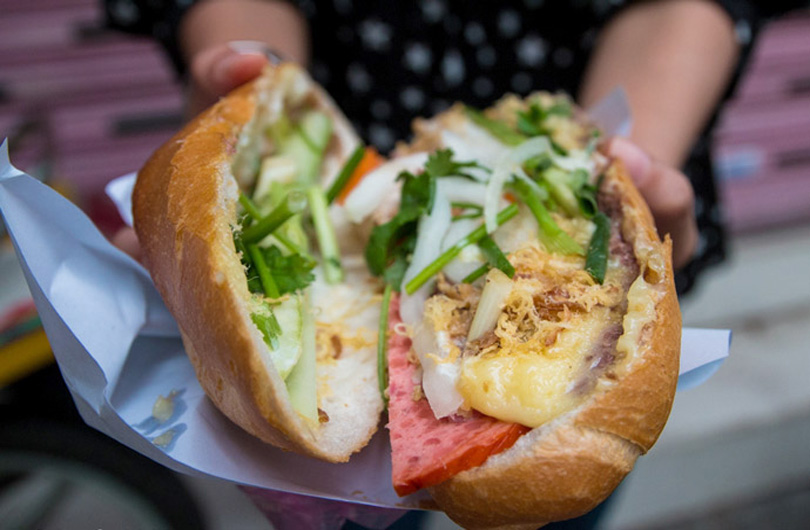 The bread is usually baked to be hot and crispy before getting an incision along its body and orderly stuffed with spices, butter, meat (or eggs, meat pie, pork, char siu, etc.); some vegetables (cucumber, cilantro, scallion, etc.) will be put up on the stuffings and the available sauce (chili paste, soy sauce, etc.). Vietnamese fried crispy pancake is one type of typical cakes in the Central and The Southern Vietnam. However, when “banh xeo” came to Ho Chi Minh City, it became a very popular dish from rustic diners to luxury restaurants. When enjoying Banh Xeo in the Southern Vietnam, visitors are usually interested in serving it with an abundant plate of characteristic raw veggies, such as silk leaves, green mango… 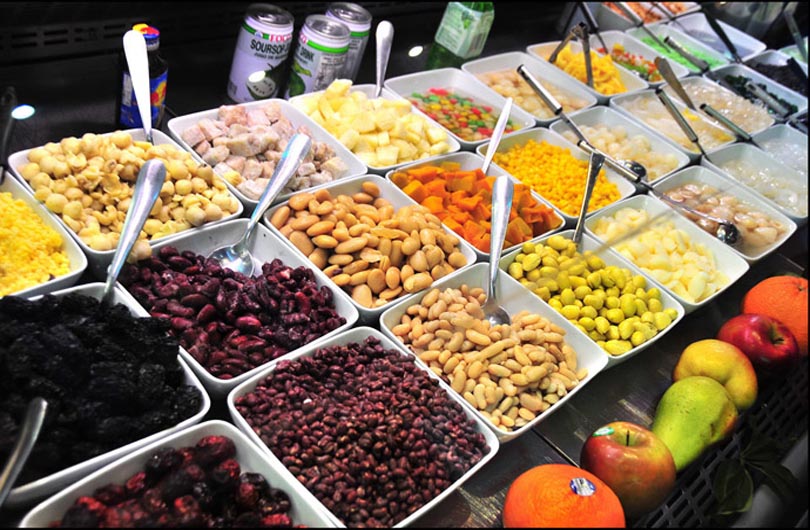 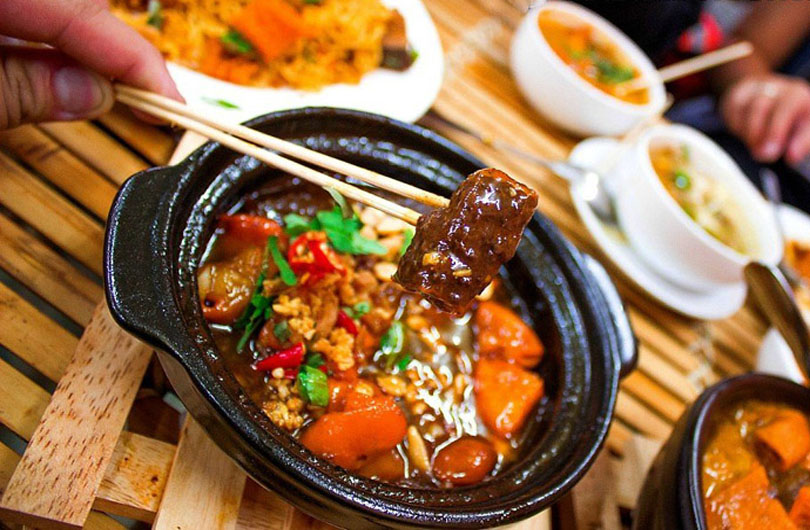 Since a long time ago, Vietnamese viscera soup has been considered as a delicious rustic snack of people in Saigon. Strangely, from children to the elderly, everyone can be “addicted” to this dish. Pha Lau is actually a dish made from animal’s organs. There are many types of Pha Lau: pork, poultry, beef … Beef viscera soup is the dish that people like the most. Perhaps people will not feel familiar when they eat this dish the very first time, but since the third time tasting it, they will be actually “addicted”. This is also the best street food in Saigon. 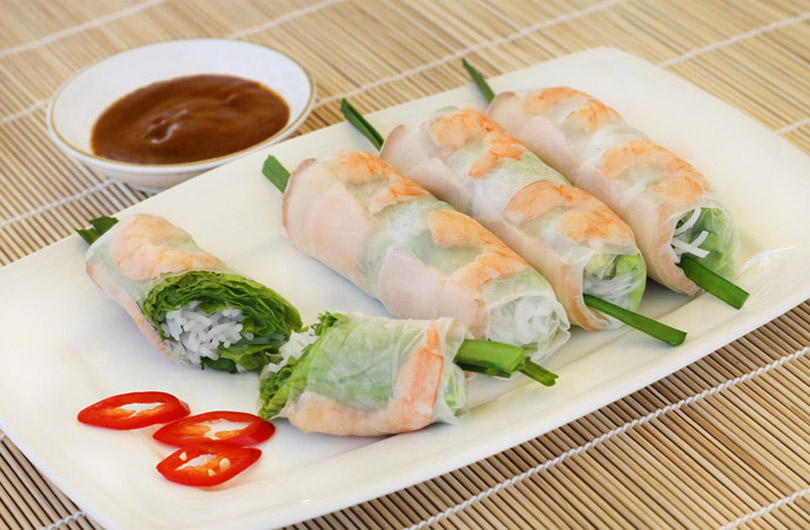 This dish can be caught up anywhere on the streets around Saigon. Just a thin rice paper for the outer layer and some boiled, crustless shrimps, lean pork, vermicelli, raw veggies, Chinese chives, and a small cup of dipping sauce, fresh rolled salad become a favorite snack of many people. The essence of this dish is in the dipping sauce. Each diner contains their own secret sauce prepared separately for each type of the rolled salad with unmistakable flavor. 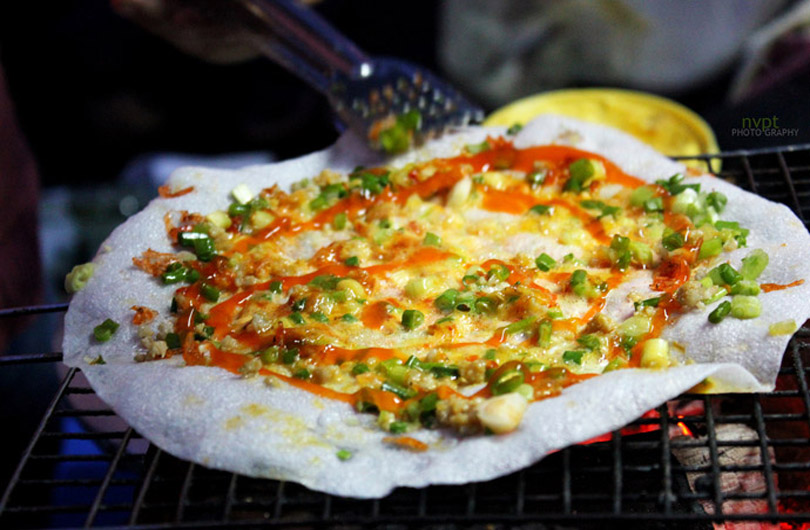 In Saigon, this dish is changed a little bit in the taste: thinner outer layer, butter used instead of sergestidae paste… It does not contain a lot of picky ingredients; just a few quail egg (or chicken eggs), crushed meat, fried onion …make this aromatic crispy grilled dish the choice of many young people, especially in the afternoon when it suddenly rains. 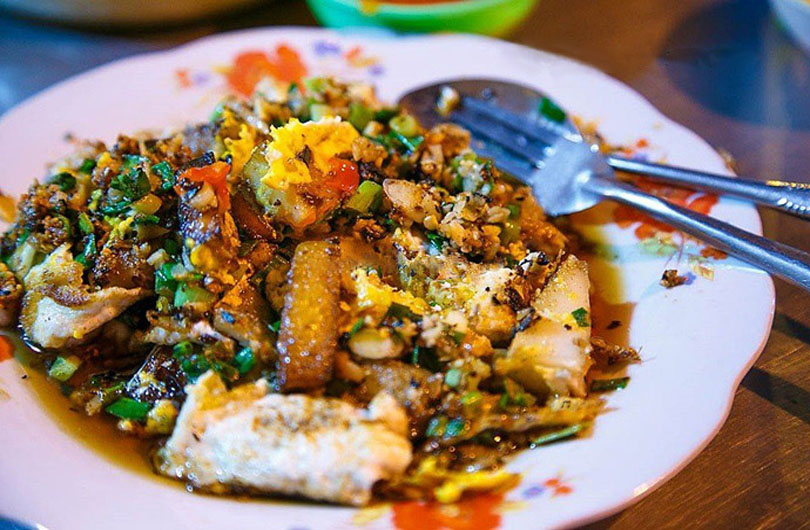 Many people become the “followers” of fried dough because of the familiar-but-strange taste in the blending of cassava flour, rice flour, and eggs. A plate of fried dough consists of rectangular pellets were fried up, mixed with scrambled eggs, scallion, and shredded papaya and cassava. In Saigon, there are many diners which sell traditional fried dough, such as the ones in Vo Van Tan Street (District 3) and Pham The Hien Market (District 8). This is also a great street food in Saigon people should try. 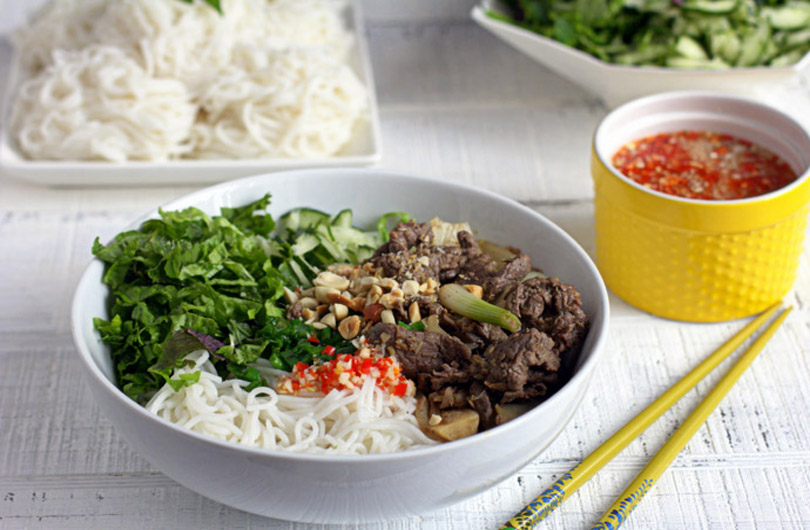 Being processed in many ways depending on the diners, but the most popular fried vermicelli is still the vegetarian vermicelli served with bean sprouts, cabbage, fungus, tofu, and crispy fried meat pie. This dish is light so many people love eating it and selecting it as the breakfast. The taste of Bun Xao is mainly determined by the vermicelli: they must be thin, fleshy, chewy, but not too dry. Fried vermicelli can be easily found on the street around Saigon. 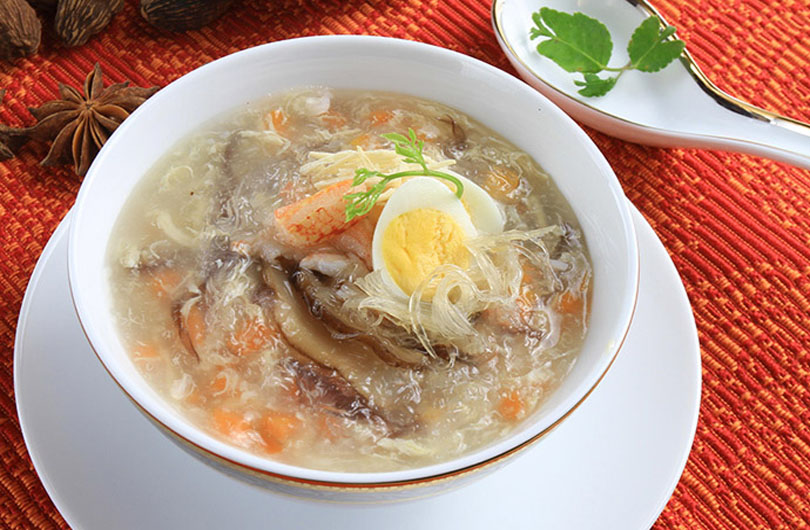 As one of the common breakfast which are very popular in Saigon. With the main ingredients including crabmeat, mushrooms, bamboo shoot flour, and quail egg, plus spices, such as cilantro, pepper powder…People who enjoy the dish at the first time will feel a little bit strange due to the taste of the crab soup, but will be quickly “addicted” to this nutritious and delicious dish. In Saigon after rainy afternoons, the crab soup diners in the alleys attract even the busiest person with its special and delicious taste. 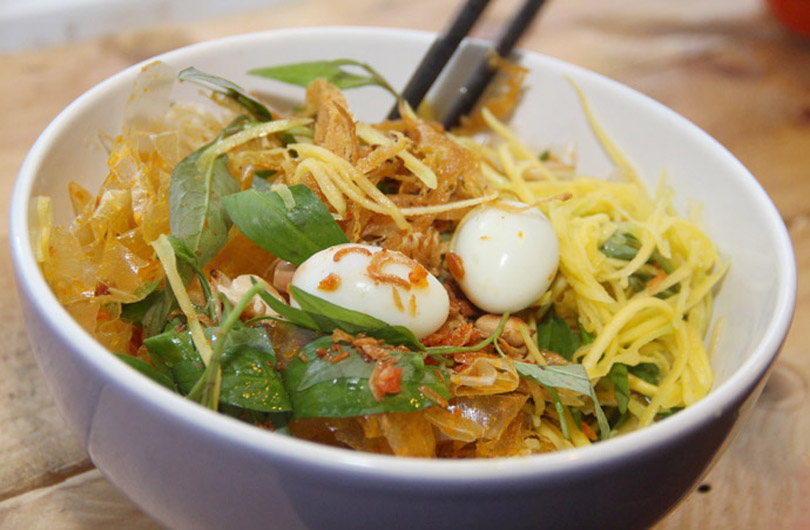 As one of the popular rustic dishes with the simplest ingredients, mixed shredded rice paper (or “Banh Trang Tron” is the just the shredded rice paper rolled with dried shrimp, teared marinated squid, and quail eggs, but when it is mixed with soy sauce and laksa leaves, bringing about a special dish with quite delicious taste which does not make people feel cloyed or greasy. Although it is not highly nutritional, the mixed shredded rice paper so far is among the top snack choices of the youth in Saigon. 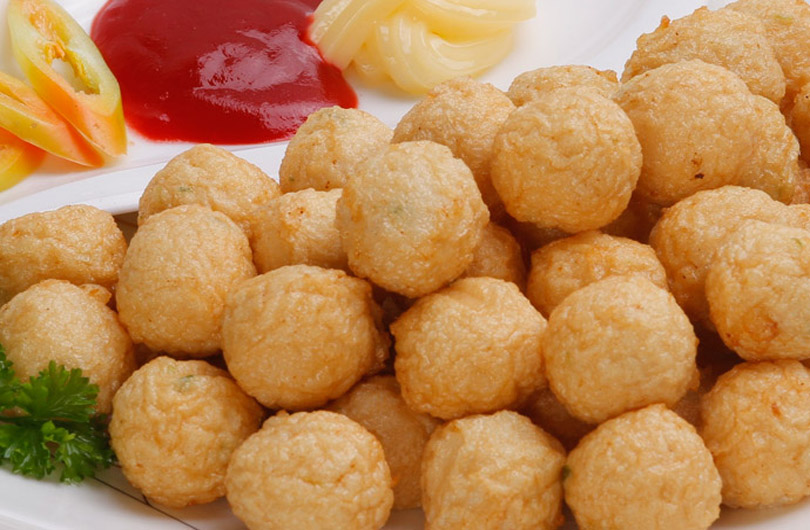 Perhaps no other snack is sold on the streets in Saigon rather than fried fish ball. Virtually, in any corner of Saigon, from the alley to the downtown area, we can easily find the signs of the carts selling fried fish ball. 4-5 fish balls will be strung on a skewer. When the customers come and buy the dish, the sellers will take the skewers and place them in a hot pan full of oil. After 5 minutes, the customers will have hot, delicious skewers of fried fish ball served with chili sauce – a tasty and addictive street food in Saigon you should try once in your life when coming to this city. 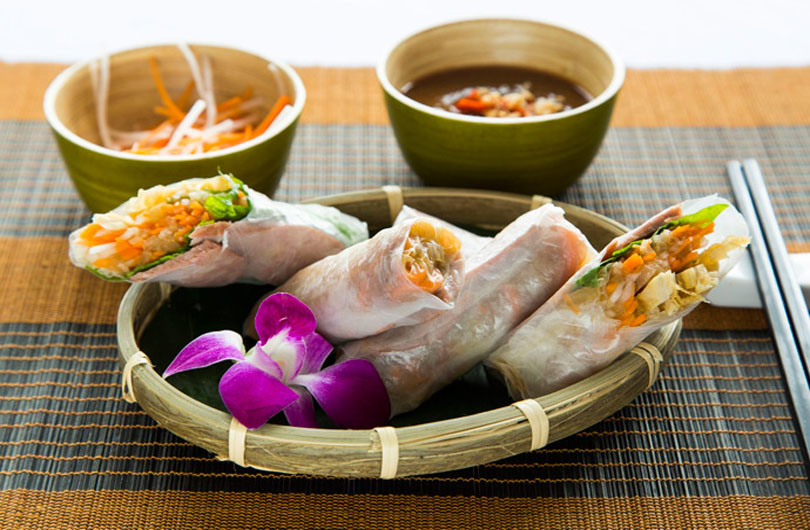 Often being confused with spring rolls, Vietnamese popiah requires a little bit more sophisticated cooking process. Originated in China first, over the years, Saigon Popiah has been changed gradually with some variables, but there are still 5 main ingredients in the dish: sausages, dried shrimps, egg, shredded cassavia, lettuce, and rolled out with a thin rice paper layer. This dish is regularly dipped in customized soy sauce. 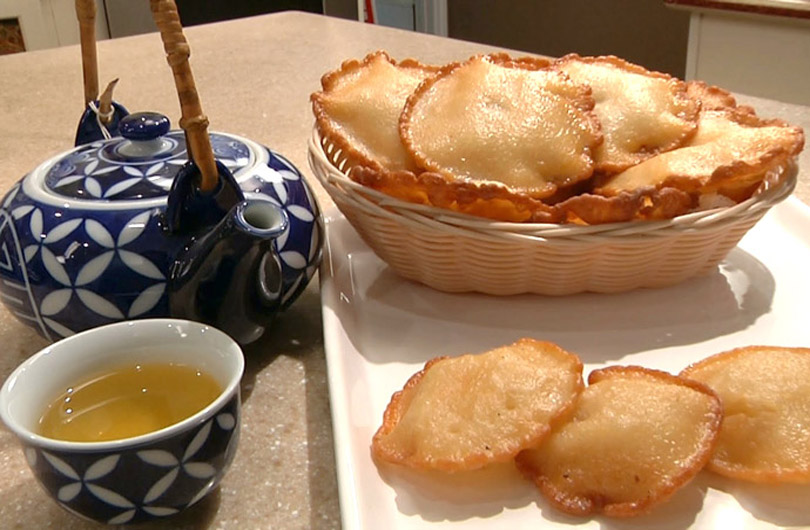 Banh Tai Yen is the last popular street food in Saigon I want to show people in this article. This cake comes with such an interesting name because initially, rural people called the cake according to the shape of the cake which is similar to the shape of the oats. Then, people called the name of the dish deviately from “to yen” into “tai yen”. In some places, oat cakes are also known as cone cake. A “right” oat cake needs to ensure the toughness of baked rice flour in the center of the cake, the porous of the outer shell, with the refreshing sweetness of sugar and coconut milk besides the requirements for shape, color…

One thought on “14 Dishes You Should Not Miss in Saigon”