By Detoured Asia 3125 Views One Comments

Saigon is a fascinating, vibrant and youthful city, but it’s not one that’s full of must-see tourist sights. To experience the best of Saigon, focus on its minutiae; the little details of this big city. There’s no better place to do this than in the tangled network of narrow alleyways that fill in the gaps between the city’s major roads. Saigon’s thousands of alleyways – sometimes no more than a few feet wide – are where the majority of Vietnamese live, and it’s here that you’ll find the ‘real’ Saigon. What’s more, the alleyways offer far more charm and interest than the central area of District 1, where most travellers spend their time. Getting lost on foot in the web of alleyways brings you into contact with friendly local people, great street food, intriguing architecture, and, best of all, local life. And this particular ‘attraction’ is free! In this guide I’ve mapped and written about five of my favourite areas for alley walks in Saigon. 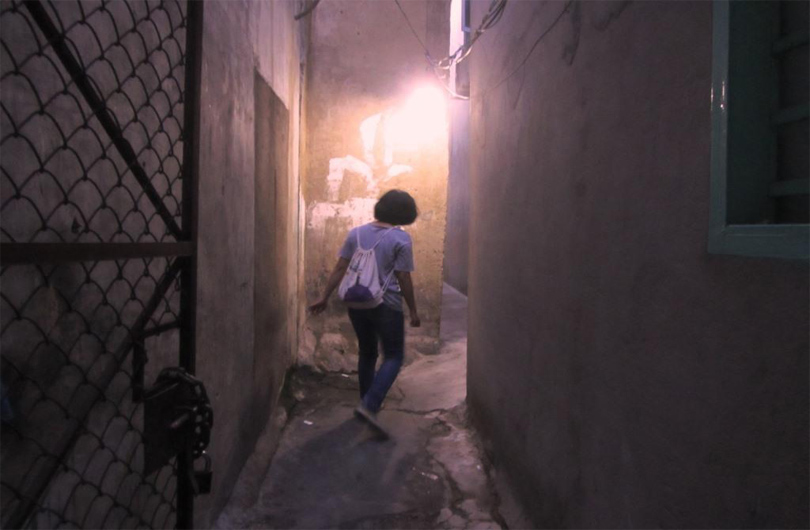 Exploring Saigon’s alleyways is a lot of fun and it gives you a chance to see real, local life….and it’s free!

Alley life is a completely different (and much more pleasant) world to the one you experience on the main streets of Saigon. Walk a few metres down any alleyway and all city noises disappear, as does all traffic. The rhythm of life is slower, calmer, and on a more human scale. It’s cool and quiet, but there’s no shortage of things to see and do: colourful fruit markets, pagodas, hidden cafes, street food vendors, shrines and even tombs. Smells are a big part of the alleyways: all sorts of cooking scents the air, especially during early mornings and late afternoons, as does the perfume of washing detergent from laundry hanging out in the sun. People live in such close proximity that there’s an intimacy to alley life: you get the feeling that life is shared; children play, do homework together; families cook, eat and drink together. All this happens either in the open-air or in ground-floor rooms with the doors wide open, so that you really get to see life happening. 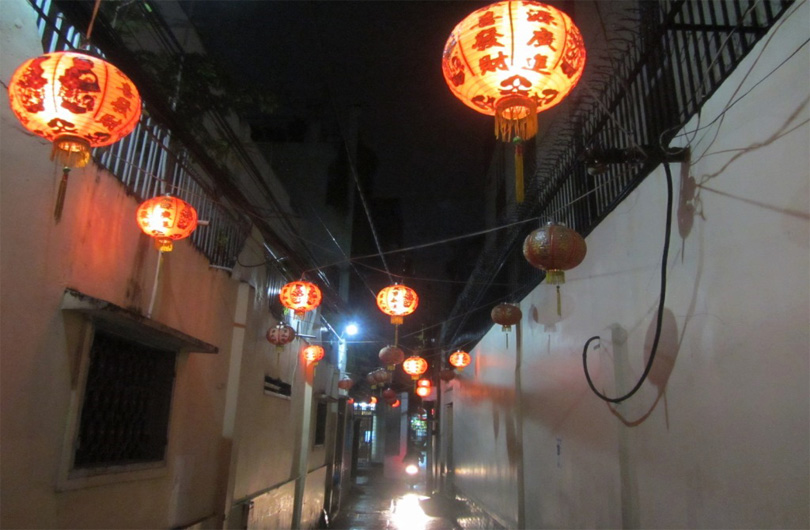 Some of the Phan Xich Long alleyways are hung with red lanterns, leading to hidden pagodas

This collection of alleyways and small streets is hemmed in on three sides by some of Saigon’s busiest main roads, which makes the quiet refuge of shady alleys all the more appealing. Phan Dang Luu street to the north, Phan Xich Long street to the east, and Phan Dinh Phung street to the west enclose this network of affluent-looking alleyways. A good place to enter the alleys is on Đoàn Thị Điểm Street: there are two entrances: one from Phan Xich Long and the other from Phan Dang Luu. Weave your way past markets and food vendors until the alleys get smaller. Particularly narrow and atmospheric are the routes between Cô Bắc and Cô Giang streets.

There are a lot of pagodas and temples hidden in these alleyways. You can often find your way to them by following the red lanterns lining the narrow passageways. One pagoda in particular is worth searching for: Tổ Đình Phổ Quang (127/25/13 Cô Giang) is a classic melange of old and new religious architectural styles, but it’s the walk there – strung with lanterns hanging from electrical cables – that’s most impressive. When wandering through these alleyways, don’t forget to look up so that you can see the myriad ways in which Vietnam’s middle class choose to decorate their new homes: no two houses are the same. For an iced drink or a caffeine pick-me-up after all the walking, try the Coffee House, on a corner on Đoàn Thị Điểm street. 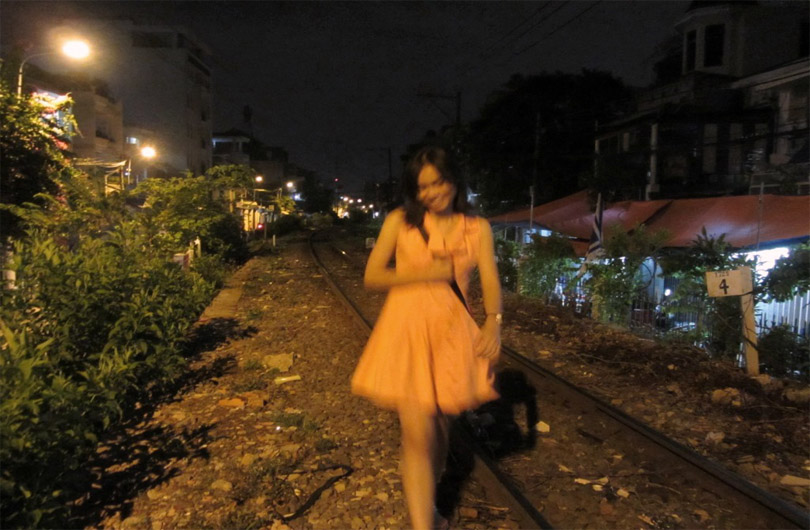 The Le Van Sy alleys are bisected by the railway, which is treated by locals as just another alleyway

These alleyways are in the same district as the Phan Xich Long alleys, but in a very different area. Here, there’s a more suburban, village-like atmosphere: it feels as though these alleyways are a self-contained world; an autonomous quarter within the city limits. Bounded by the railway to the east, the Thi Nghe Channel to the south, and Huynh Van Banh street to the north and west, you’ll find little cafes, informal eateries, Buddhist pagodas, Catholic shrines, and small local markets. Many of the alleys have recently been repaved, leading to the construction of some large, chateau-like houses, which loom over the poorer, concrete-box dwellings of less fortunate residents. Every hour or so, you’ll hear the horn of the train blaring out as it passes behind the alleys. The narrow passageway on the east side of the tracks is home to some good shellfish and (if you’re feeling adventurous) dog meat restaurants. Alley 115, on the west side of the tracks, offers a couple of trendy cafes which are good for an iced coffee while watching the trains go by: try Cafe Nhỏ and Creative Station.

Deeper inside the tangle of alleyways, don’t miss the grease feast at Quán Lệ Hồng (489/27/39), which specializes in bò né – thin-cut beefsteaks, served on a sizzling, cow-shaped plate with various accoutrements. Another good place to eat is the Chinese noodle shop on the corner of Le Van Sy and alley 137 (also known as Trần Hữu Trang street). I have a sentimental attachment to this alleyway, because my old house is located here. (Alley 137 is also a good point at which to enter the alleyways.) As you wander further west, there are several large and small temples and shrines, most of which are Catholic but some of which are Buddhist. You might also pass by Na Na Pet Coffee: a cafe where pet owners can bring their pets to ‘mingle’ with other animals. There’s lots of street food fun to be had on and around alley 541, particularly at the popular shellfish eatery, Ốc Luộc. 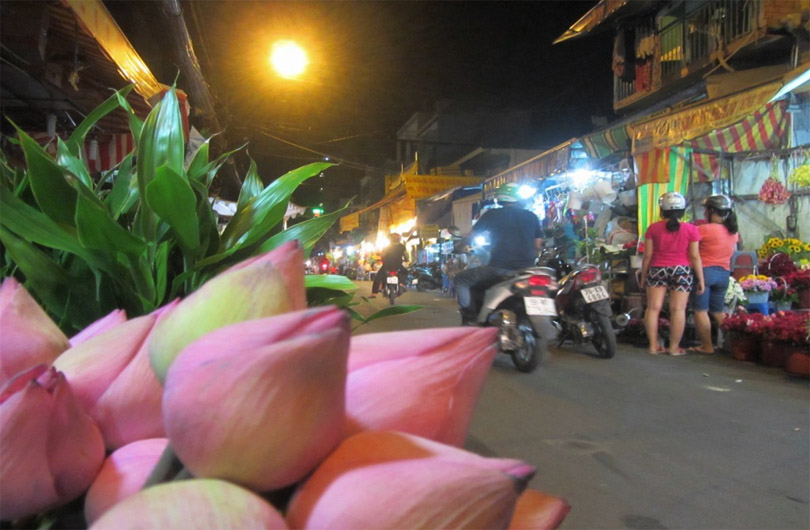 The alleyways around Hồ Thị Kỷ street in Distirct 10 feel less affluent than the previous two areas, but they are alive with food, people and, thanks to a night flower market, colour. Trapped in a triangle between three main roads – Le Hong Phong to the west, Hung Vuong to the south, and Ly Thai To to the north – these alleys are best visited at night, when street food, families, fluorescent lights and flowers are everywhere. The grid of alleyways is easy to navigate: the main focus is Hồ Thị Kỷ street and two smaller lanes running parallel either side of it. One of these, Trần Bình Trọng street (east of Hồ Thị Kỷ), is where thousands of colourful flowers arrive on small trucks from the mountain town of Dalat, at around 11pm and into the small hours of dawn. This is a great time to visit, as roses and lilies scent the air and you can buy flowers cheaply straight off the trucks.

The narrow lane to the west of Hồ Thị Kỷ is packed with interesting street food. There’s a large Cambodian community here so many of the food vendors offer Khmer dishes. The most famous of these is Chè Cô Huôi (57/21A), which specializes in Cambodian desserts, or chè in Vietnamese. These include fascinating combinations of fruits, jellies, candies, beans and all the other weird and wonderful ingredients that go into creating chè (read more about chè here). At the northern end of Hồ Thị Kỷ is ‘Beef Hotpot Alley’, a bustling corner where locals gather to eat, drink and talk around big pots of beef stew: try Lẩu Bò Hoàng Thu at 84/1 Hồ Thị Kỷ. To the south of the street there are plenty of shellfish eateries. 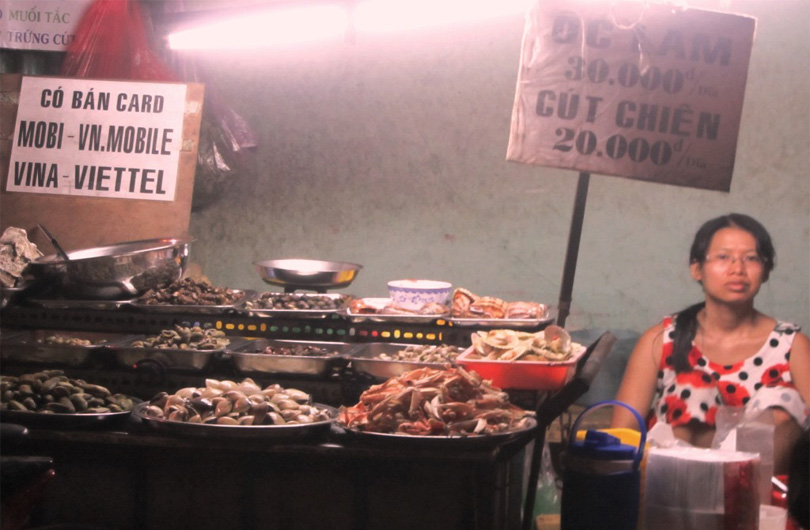 The Doan Van Bo alleyways are strong on street food: from shellfish to soups, you’ll find it all here

Bound by some of the best street food streets in the city, this geometric network of tight alleyways are some of the liveliest and ‘tastiest’ in Saigon. A series of narrow concrete channels runs from Hoang Dieu, Vinh Khanh, Doan Van Bo streets and Xom Chieu Market. Enter the alleys from any of these busy streets with the express purpose of getting lost! The alleyways get progressively tighter as you wind your way deeper into the maze. Homes, shops and food stalls are punctuated by small Buddhist temples. 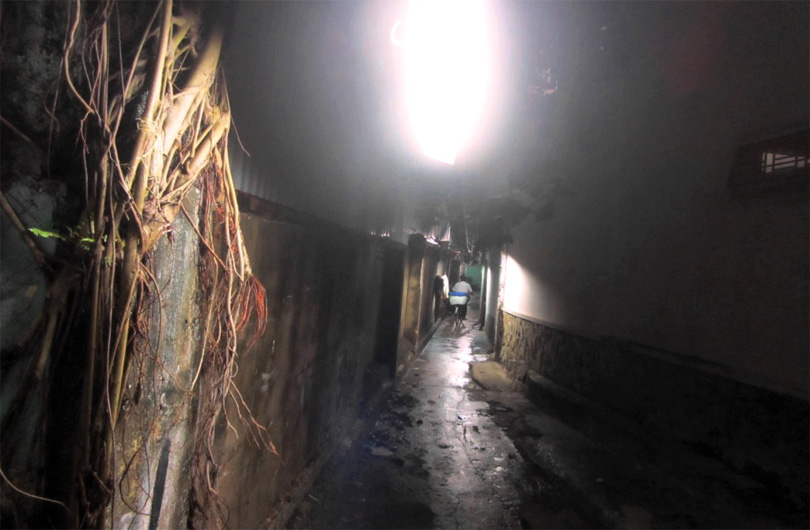 Squeezed between Tran Hung Dao boulevard and Vo Van Kiet street along the Ben Nghe Channel, this large grid of alleyways is very residential. The grid layout means that these alleys are much easier to navigate compared to the others in this list. As they are located on the border of District 5 and District 1, this network of alleyways is pretty close to downtown Saigon; within walking distance of the backpacker area around Pham Ngu Lao. Narrow channels of asphalt lead between four-storey family homes. During the day, there are plenty of local soup and rice eateries that operate out of the front rooms of some of the homes. At night, the alleyways are lit by a mixture of attractive street lamps and fluorescent strip light-bulbs.

Although these alleys are quieter than the others in this list, there are still several cafes, pagodas and snack bars hidden in the unlikeliest of corners. The Chai Vintage Cafe (393/6 Tran Hung Dao) is an atmospheric little place to stop for a drink. There’s lots of food on Nguyễn Cảnh Chân street and, thanks to the presence of a mosque on Tran Hung Dao street, you can dine at Phở Muslim on alleyway 457, which is definitely worth a try.

One thought on “5 Alleyways for Great Street Food in Saigon”