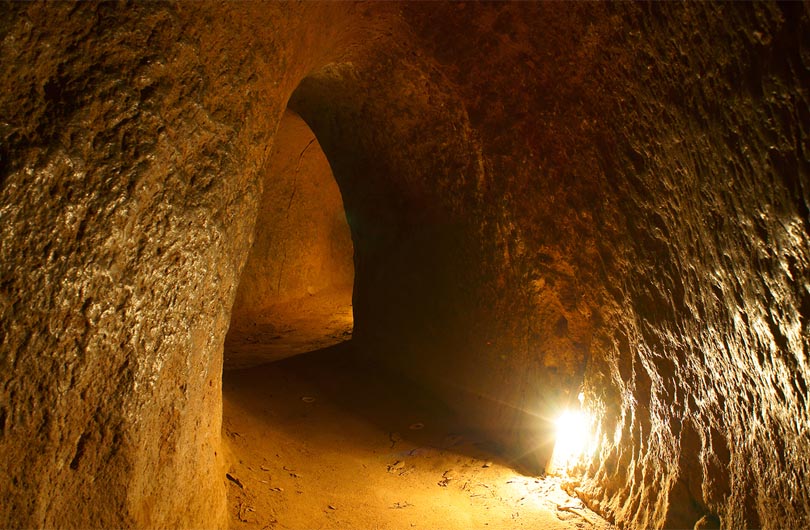 Set around 60km from central Ho Chi Minh City, the Cu Chi Tunnels earned legendary status during the Vietnam – American War. A massive network of underground tunnels and chambers, Cu Chi, in its entirety, stretched for over 250km from Saigon all the way to the Cambodian border. Few sites bear stronger testament to the North Vietnamese and Viet Cong’s will to defeat the Americans (and the French) than these tunnels.

It’s a little realized fact that the Cu Chi tunnels predated American involvement in Vietnam, with the first tunnels being dug after the end of World War II in the late 1940s. In the following decades the system became more comprehensive and the tunnels and chambers more elaborate. The American troops first tried to attack the tunnels of Cu Chi from within by sending “tunnel rats” down into the tunnels to fight their way through. These brave soldiers, operating under dual disadvantages of their size and not knowing the territory, endured a horrific fatality rate. When that was shelved, the generals decided to attack the Cu Chi tunnels from the air, first defoliating land then bombarding it with heavy bombs, including weaponry specifically designed to collapse the tunnels. Through all of this the tunnel networks survived. It wasn’t until the late 1960s when American B52s carpet-bombed the area that substantial sections of the tunnels were finally destroyed.

Despite all the bombings in their town, the Cu Chi people were able to continue their lives beneath the soil, where they slept, ate, planned attacks, healed their sick, and taught their young. Some even wed and gave birth underground, but at least 45,000 Vietnamese men and women are said to have died defending the Cu Chi tunnels over the course of the Vietnam War. In the years following the fall of Saigon in 1975, the Vietnamese government preserved the Cu Chi tunnels and included them in a network of war memorial parks around the country.

A tour to Cu Chi tunnels usually included a trip to the Cao Dai Great Temple at Tay Ninh. Upon arriving visitors first are shown a black and white propaganda film and then a local guide will show the hidden entrances to the tunnels and various traps and home-made weapons that were used. The tunnels are extremely small with an average height of between 1m and 1m30 so. Tourists can also fire various weapons such as an AK-47, M16, M60 or Magnum 44 where each bullet costs between 20-25,000 VND but for a minimum of 10 bullets.